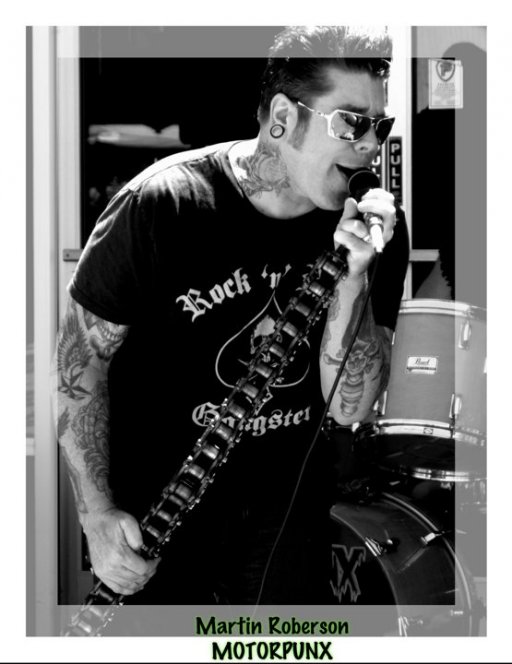 The full length CD, "This and That," is available at an economy-friendly price, as well as shirts, stickers, and buttons!

The Motorpunx features Gabe Gossack on guitar, Justin Sane Illges on drums, Ron Fulton on the bass, and Martin Roberson on lead vocals and harmonica. They are all veterans of various well-known bands such as The Defiant Ones, The Forgotten, The Blanks, Bad Neighbor, Hummer and Hectic Sausage — all of which are West Coast favorites.

The lead singer, Martin is the proprietor of Lucky Stars tattoo shop and much of our kick-**** swag can be purchased there along with some incredible ink!

This show coming up on Friday, December 9th at the Blank Club is going to be EPIC.  The Chop Tops are celebrating Sinners Birthday with a line-up that will rip your creepers off.  Motorpunx will be going on first and we're playing everything. Don't miss this show if you know what's good for you.

CHOPTOPS, HAYRIDE to HELL, The INFAMOUS SWANKS & MOTORPUNX!!!!  I get the chills just thinking about it!!!

We wanted to let you know that Motorpunx took some time to blast out a few new songs at the Art of Ears studios!  We need to thank Andy "Andro" Ernst - who has recorded great bands such as Green Day, Good Riddance, AFI, Rancid (to name only a small few of his accolades) for capturing that raw live sound that Motorpunx generates and put down on digital.  We melted the windows and scorched the carpents, and it felt good to record again.

While currently an untitled EP, we wanted to get out a few tunes for you, in hopes that you rock em as hard as we do!  We have more on the board, so it's likely we'll move forward with an LP and videos to match.  UNtil then - Enjoy - and we'll see you at the shows!

Hey Everyone!  Word has it Motorpunx will be ripping it up at these upcoming shows!!

With more show dates and details to come!

We've been having solid writing sessions and have a number of new songs getting the final motlen-tune.  Let me tell you, the first of these songs is finalized and sounds amazing.  It will sandblast your face and destroy your desire to listen to anything except MOTORPUNX.

Stay tuned for info on the existing shows and we'll keep you posted on our studio dates for the recording of our next disk.

Posted in: The Latest Tune-up | 0 comments

Well, if you were at the Avalon Club on Saturday, the 8th, you already know what kind of show it was.  If you were some of the unlucky few unfortunates to have missed it, you missed a punkabilly gathering!

Motorpunx shared the stage with the likes of Ghost Town Hangmen, Thee Merry Widows, the Shitkickers, Hayride to Hell and The Chop Tops.  By 8 PM, the crowd was gathering, the drinks were flowing and it was clear it was going to be a great night.

With a crowded house and people still packing through the front doors, Motorpunx went on second.  Despite some stage-sound issues, we tore up the floorboards with a blistering 8 song set.  We could have fit another song in, but anymore would have blown out the O-ring on that machine.

This was our new bassist, Ron Fulton’s, first gig in Motorpunx, but you wouldn’t have known it.  Between him and Justin Sane, the rhythm section was thundering in time with Gabe’s amazing guitar tones and Martin’s rich vocals and harmonica melting the audience into molten trend.

Thanks to all of you who were there with us!  We look forward to seeing you at the shows!!!

Hey Friends, welcome to the new year.  MOTORPUNX are kicking it off in style by playing the Avalon Club in Santa Clara on January 8th with one of the best line-ups you can have! The Chops Tops, Hayride to Hell, The Shitkickers, Thee Merry Widows and Ghost Town Hangmen will all be sharing the stage at this hellraising punkabilly fest.

Don't miss this show - we're going on early (at 8PM) with a slightly shorter - roudy set that will blister your face.  This will be our first show with our new bassist Ron Fulton. Ron is a Santa Cruz native and a long time pro-veteran of the Santa Cruz, mountain and bay area music scene.

This year will be some excellent gigs and look for our next LP this year, which will find us in front of the camera as well.  If you know of events throughout the year that Motorpunx should be playing - send us the **** - we'll make it happen.

Don't forget - DigNit offers our music player automatically to your FaceBook too, So just look to the right under 'social networking' and share it with your friends and enemies!

See you at the shows!

Welcome to the Motorpunx App

All things Motorpunx all the time!