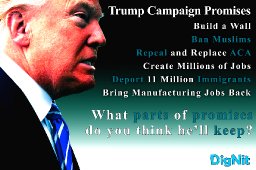 Donald Trump has promised to build wall between Mexico and the United States, a dubious promise at best.  We doubt he will be able to muster the budget, man power, or will of the government to come close to accomplishing this one.  How are his most hardcore supporters going to react when he doesn't deliver on his first big campaign promise?  They'll probably blame the U.N. or N.A.T.O.

Trump has further promised to ban Muslims from being able to enter the country. Given the current climate of fear in the U.S., we think he might be able to pull this one off.

Trump has promised to 'create millions of jobs'...that's an easy one.  The proof will be obvious.

Donald made a big promise of deporting 11 million immigrants.  At 2.5 million, President Obama has deported more people than the all Presidents of the twentieth century combined.  He will deport people, but there is no infrastructure or workforce available to deport 11 million people.

President - Elect Trump has promised to bring back manufacturing jobs.  This is possible...he could bring back 20 jobs and say he succeeded.  Trump did not give any measure of success to this, and the top 1% isn't going to give up the profits they make by manufacturing offshore.

All in all, the game Trump played to get elected was either well-calculated, or people are just so angry, scared, and fed up that he got lucky.  If it is the former, he might actually accomplish something, if it is the latter, well...we'll see you on the flip side of 4 years and see what is left standing.