Corporations Are People - Until Jail Time is Involved 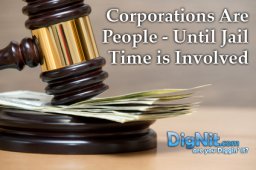 Five large banks pleaded guilty today to criminal charges, and will pay $5 Billion in fines.  The banks, which include giants JP Morgan Chase and Citicorp, admitted to manipulating markets in what they themselves describe as a "cartel".

In one of the biggest bank swindles of all time, traders for the banks used an exclusive electronic chat room and coded language to manipulate national exchange rates in ways that benefited their own trading positions by manipulating the $5.3-trillion-a-day foreign exchange currency market for the banks' profit.

Did any of the executives go to jail?  Of course not.  We have kids sitting in prison for selling a little bit of pot, but ripoff millions of people for trillions of dollars, and you get your own Congressman.

So, yes, corporations are people.  People who have no soul, no life to lose, and no worry about facing justice.


How can a 'thing' that doesn't fear death, or losing a loved one, or raise a child, or love be a person?